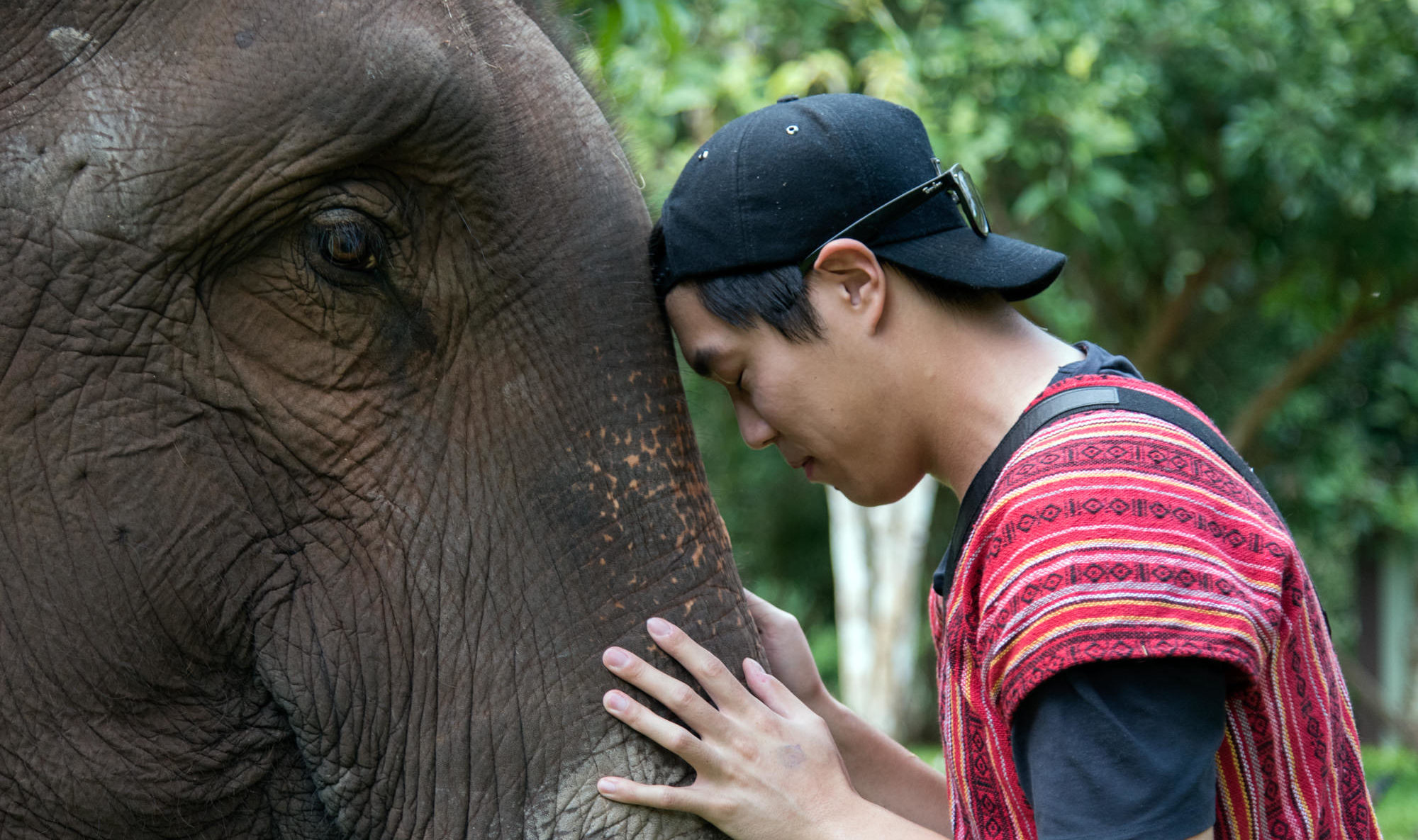 The Elephant FAQ comes from the “Asian Captive Elephant Working Group”, this is a non-profit group, not in any way affiliated to any interest and their experts are highly regarded on an international level in their fields. It was formed in 2015 by a group of elephant specialists, veterinarians, researchers, camp managers and conservationists to address the current situation for captive elephants in the tourism industry in South East ASIA. If you want to know more about them, you can visit their website.

Asian elephants have had a relationship with humans for some 4,000 years. Historically, elephants were used as beasts of burden, for logging, as war mounts, ceremonial animals or simply kept as a status symbol. These elephants were mostly captured as wild animals by professional elephant catchers who then trained and either kept them or traded them to others for a specific use.

It is now illegal to capture Asian elephants from the wild outside exceptional conditions and with Government sanction. As a result, elephants are now being bred in captivity to maintain captive populations. However, illegal capturing and trading of wild elephants is still ongoing, which is why laws and regulations are so important to ensure these practices do not continue.

Please check that camps have policies in place to ensure they are not encouraging wild capture and that all elephants are legally registered.

The IUCN Red List, the international standard for categorizing species, has listed Asian elephants as endangered (likely to become extinct). There are less than 50,000 remaining Asian elephants in 13 range countries, of which approximately 60% are in India. If we can protect existing forests, and in some places, reconnect it, some wild elephant populations are still large enough to sustain themselves.

In an ideal world, all elephants would be free in nature. However, due to human population increases and habitat destruction, the reality is there is not enough appropriate habitat to support current wild populations of Asian elephants. Let alone reintroduce the existing population (upwards of 15,000 in Asia) of captive elephants.

Furthermore, it is a complex process to reintroduce captive elephants back into the wild. In addition to lack of habitat, released captive born elephants can increase human elephant conflict. Indeed they are used to interacting with and are not afraid of humans. Additionally, captive elephants may carry diseases that, if contact is allowed, can potentially spread to wild populations.

Captive elephants can serve as a means of maintaining important populations as “insurance” against environmental or human-caused changes. Up close and personal contact with captive elephants, especially when accompanied by educational materials, also can help inspire the public to care for elephants and their habitats.

How are elephants trained? What is the Phajaan, and what is crush training?

Every captive elephant must have some training to allow it to understand common verbal commands and to accept veterinary treatment. To not train an elephant under human care would be irresponsible. In the days of wild capture, the elephant was often tamed using very harsh techniques. But such methods are thankfully much less common today.

In Northern Thailand, “Phajaan” is in fact not a training method at all, but a spiritual ceremony associated with the training. It is carried out before training to ask the spirits to protect the people and the elephant. This ceremony is an important cultural tradition.

Today, captive born elephants grow up with and around humans and often begin their training soon after birth. Attitudes are changing and more owners are recognizing the benefits of using more humane and ethical training methods.

Is performing and doing tricks bad for elephants?

Elephant performances, if done properly using positive training techniques, are not bad for elephants. Ethical, well managed and properly scripted animal presentations can have benefits to the animal’s health. Indeed they provide a form of exercise and mental stimulation. Many elephants readily participate in these activities because they are rewarded with favoured foods and attention. However, some activities should not be allowed (walking on hind legs, sitting upright, or riding a bicycle). They are not only unnatural behaviours, but can negatively affect the elephant’s well-being and physical health.

A good camp should determine what activities are best suited for each individual elephant. If the elephant looks healthy, is guided using positive methods, a show can be a beneficial component of a captive elephant facility.

How much do elephants need to walk/exercise every day?

The amount of walking a wild elephant does each day depends on the quality of their habitat. Asian elephants can walk 3-20 km a day in search of food and water. A herd of elephants may walk seasonally in an extended loop, looking for fresh resources within a home range that can be anywhere from 30 – 300 km3. The better the habitat quality, the less elephants will walk.

Elephants in captivity usually are provided with adequate food and water, and may not walk much if they do not have to. Thus, it is important they be provided ways to exercise, such as being walked several km daily or participating in trekking. Daily exercise is important for skeletal, digestive, foot and joint health, and to avoid obesity. Exercise is also an important form of enrichment for captive elephants, alleviating boredom, reducing aggression, and thus improving the welfare of the animal.

Do elephants like to interact and be close to people?

In captivity, most elephants have become accustomed to people. They have learned that people bring rewards, such as food treats. Even some wild elephants will interact with people in return for kindness or food – though this can be very dangerous. Some elephants seem to enjoy being part of a social group, even if that group includes humans. Other elephants are wary of people. All elephants should be approached with caution and never without the mahout present.

How do you know an elephant is happy?

It is difficult to determine if animals are truly ‘happy’ or ‘sad’, as their emotional states are not exactly like those of humans. Still, there are certain behaviours that display a state of emotion that can be related to happiness. For example, the display of exploratory or playful behaviours is a good sign that an elephant has good welfare. Happy elephants are probably best observed when kept in compatible social groups. Look for elephants that touch and comfort each other. Check out what each other is eating, play during bath time and vocalise a variety of greetings. These are examples of contented elephants. A good camp will give elephants ample opportunity to exhibit these behaviours.

Why are elephants chained?

Chaining is an important part of managing elephants where there are no enclosures to contain the animals. Chains are the simplest and safest tool to confine these large and potentially dangerous animals to a specific area. Because they can be more difficult to control, male elephants often have permanent chains around their ankles to provide a safe and quick means to control them if necessary.

Many forms of restraint, if done properly and with appropriate tools, are not harmful to the animal. A chain of sufficient length is important because it not only allows elephants to interact with one another but also allows them to find space alone. Unrelated elephants do not always get along and aggressive individuals can be dangerous to other elephants, sometimes fatally so. From a management perspective, using long chains to tether the elephant at night rather than fencing allows the elephant to be moved and allowing them access to fresh browse. Fences are often unreliable and, if not constructed properly, can be dangerous to the elephants themselves.

Satisfactory alternatives to chaining, like cement or steel structures, are very expensive and are therefore financially not possible and are impractical for most elephant tourism operations in Asia. 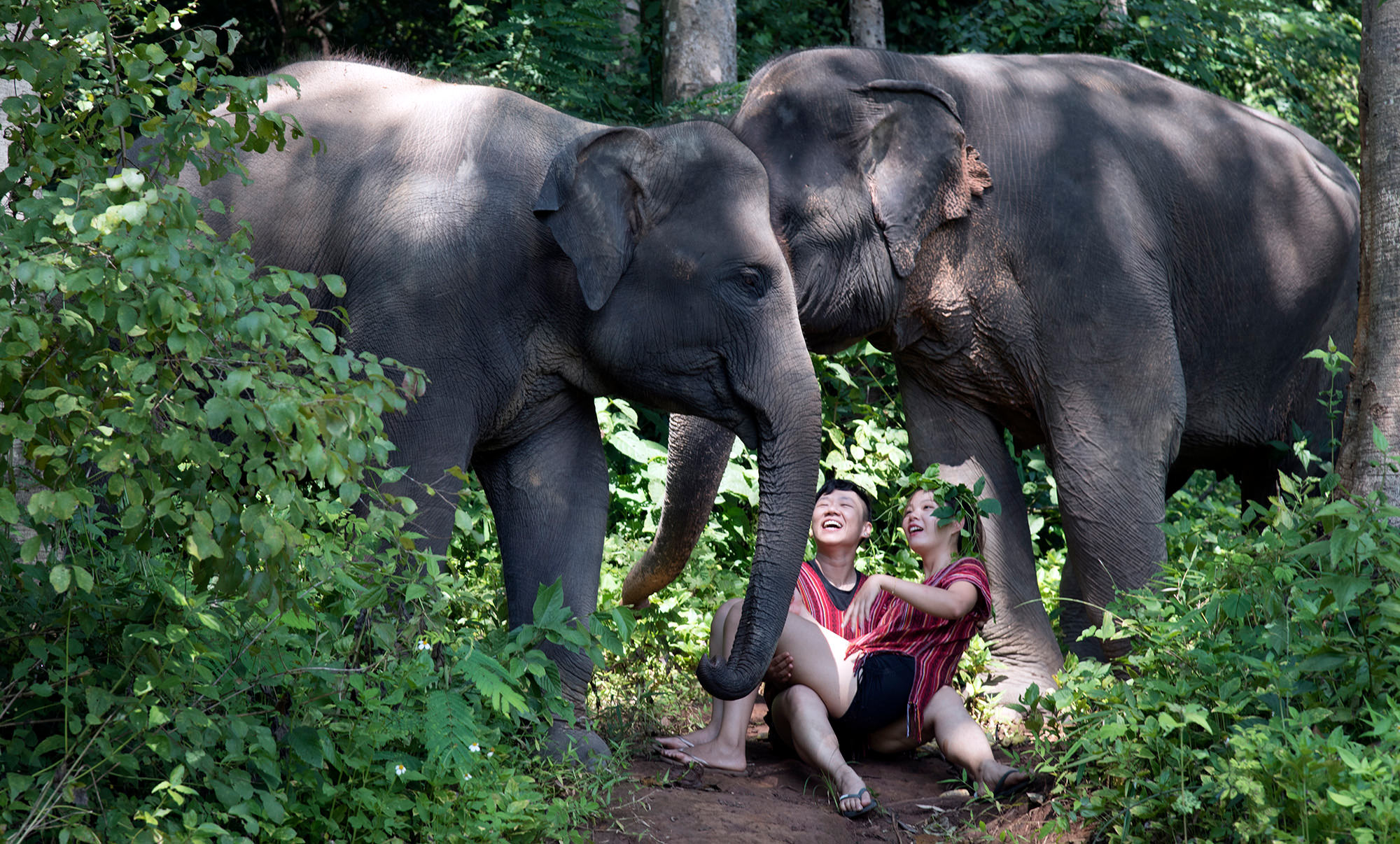 What types of payment do you accept?

You can pay by:

What are the seasons and climate?

We have 3 seasons here:

Do you provide insurance?

Accident insurance is included with all elephant tours but we recommend you also have travel insurance.

We won’t refund the advance for cancellations within 48 hours of the scheduled tour date except in the case of force majeure or exceptional circumstances.

What happens if it is raining on the day of my tour?

The tours will still go ahead if it is raining. Elephants love the rain and it’s an amazing experience. However, even in the rainy season, we usually have a time window without rain. If the rain is too strong and we decide together to cancel the activities you won’t have to pay anything, we never ask to pay in advance for activities.

Is bamboo rafting safe if don't know how to swim?

The river is usually shallow and you can request a life jacket. During the rainy season, the stream can be too strong so you won’t be able to do this activity. Anyway if you are not sure we suggest you wait to see the river before making your decision.

Is ``Elephant Wake Up`` and ``Elephant Experience`` included with the price of the room?

Do I have to give tips?

Tips are not required but there are always welcome!

Do you have vegetarian and vegan food?

Yes, we can adapt the menu to give you vegetarian and vegan food.